Hello humans, Monday and guess what I’m back !

Today I’d like to tell you something about social interactions among cats. And we will see where this will lead us. Hopefully, there will be something in it for you.

Humans have two favourite pets. On one hand dogs, on the other cats. There is a difference in social behaviour of these two animals.

Dogs are animals that live in a group called a pack. They have a structure in their group. Some are leaders, others are followers. Coming down from their ancestors: wolves. Among wolves, only the leader of the pack is allowed to mate, just as an example.

Cats, on the other hand, don’t give a f… about social structures. In the wild male and female cats only meet for mating. After the ‘wedding night’ they separate. Each one going his own way. The female gives live to the kittens, educates them for 6 months. After six month mother and her kitten separate. And the mother is ready for another wedding.

This does not mean at all that cats can’t live in a group. Cats can. We just don’t care about rules. We do not accept a superior. We just don’t need that. Our social structure is more something like: you are you and me is me. I don’t bother you and you don’t bother me. And all is fine.

As an example: I’ve already told you that my human liberated me from a shelter. Where cats have to live in a group, not enough place to live our lives separately. Therefore, I call it a prison.

When I arrived at my human, I was the one and only cat for several years. In 2009 the female found a pure breed on the web that a family had (wanted) to give away. She took this cat.

So, Habibou arrived on the scene. Bibou was a pure breed Siamese suffering from feline coryza. He was living for several years with a family in Brussels. Who never vaccinated him, therefore he had this sickness.

I never had any problems with this guy. He was calm, friendly, very attached to human company. Wasn’t hunting at all, when leaving the house he stayed in the garden. He never even tried the field next to the garden. I once offered him a mouse. He didn’t care. After eighteen months he succumbed to his illness. I even missed him and spent a day or two mourning on his grave.

The female human who was the official owner (still makes me laugh) of Bibou took a break of six months before she was ready to take another cat.

What to say about Rashid ? He’s another pure breed Siamese. He doesn’t have an illness (maybe a mental one but who am I to judge). He’s more active. He leaves the house daily like I do. He’s extremely attached to the humans. Wherever they are he’s too, especially the female one. He has the quite idiotic habit to always wanting to sniff on my paws when I return from a stroll. He even tries to steal my prey when I arrive with a freshly caught mouse. OK, he has no idea what to do with a mouse besides playing with it. Nevertheless, he tries to steal them. Most of the time in vain. If the humans happen to be not at home he’s attached to me.

He has, at least, one positive point.

If the local bully is trying to start a fight with me, Rashid intervenes. Why ? I’ve no idea, but I guess I would do the same for him.

We cats don’t need a pack. If we have one, we’ll adapt. But the main point stays. We can live happy on our own. Be friendly to us and we will be friendly to you. 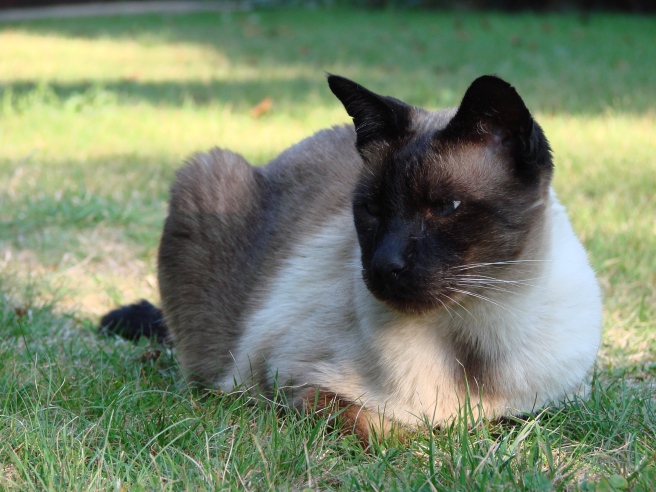 What could Ausone do ?

At the moment the idea, the working hypothesis, is : A monk in an abbey solving crimes either helped by his cat or the story told from the cat’s point of view.

Questions that need to be answered are: 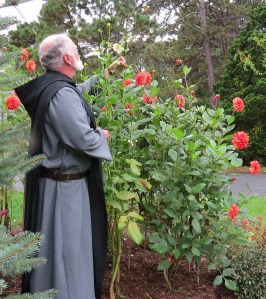 This could inspire a series of blog posts. Something around researching for a novel. Gives me another reason to read.

Will I find someone who wants to read it ?

How could I know ? It’s the journey that’s important. I would love to see that someone is interested. Dreaming is still not forbidden not even in an abbey in the middle ages.

If someone who’s reading my blog should have a comment (positive or negative) I would be more than happy. And for sure I will answer all possible questions (that’s what a blog is for, no ? Interacting with the readers !)

This time really about the creative part of it.

I guess the bug bit me when I took the decision to start my blog. The blog was, at first, meant to be only about gardening and vegetarian cooking. The writing bug stayed under the surface, well hidden.

But due to the people I’m following and those who are following me on Twitter. The urge grew stronger and stronger. So why not ?

The idea was planted in the head and, for sure, the doubts arrived. Me, writing something creative ? You must be joking.

When I was still in primary school I had to write essays. And I can still remember one of them. (and I will never forget !). We should write an essay about a dream we had last night. Whatever dream. If it wasn’t the night before then just one we still could remember. I started writing and after the forty-five minutes we had to complete the writing. I was quite satisfied with what I had produced. As usual one week later we received the corrected version with comments from our teacher. Under mine stood: “Orthography close to perfect, idea not that bad. But you seem to walk through life with a tape measure in your hand  That’s not working.”

That was all. No hints what I could or should improve. Just these three lines.

This was haunting me for forty years. For forty years I never had the courage nor even the idea of writing something creative.

Why now ? The doubts are still there and I hope these are somewhat healthy doubts.

Next problem, what should I write about ? If I look at what I’m reading. Not much help.

A private eye in ancient Rome (or another period, middle ages, for example) ? Already existing, both of them. Don’t think I’m capable of writing something that’s as least as good as these two. (M.Didius Falco series by Lindsey Davis or Brother Cadfael by Ellis Peters). A cat as a detective ? Done too (Francis series by Akif Pirinçci)

So what ? Main character will be the cat, I’m quite sure of that. Ausone’s notebook (here on the blog) is at least for now not really creative writing. Nothing of it was invented. Not even his remarks to mankind at the end of his entries.

So what could Ausone do ? Be a philosopher ? A Zen monk ? A reading cat ?