Good morning, humans. It’s Monday again thus your favourite cat is ranting again. Let me precise two things 1.favourite cat? I certainly do not know if this is true. But I just like the sound of it. Accept it. 2.Ranting? We’ll see. I try not to. But when talking to humans? It’s complicated not to. But I’ll try my best.

And I’m afraid I’ll have to excuse myself. I wasn’t really telling the truth. Several times I wrote that I’m bored. And this is not really true.

In fact, it’s not true at all. As you should know by now I’m a CAT. And being bored is a human feeling. As a cat I’m not bored. I could spend easily several hours lying on the table on the terrace and just watch the grass grow in the garden. Which wouldn’t be a pleasure at the moment. Much too windy and the temperatures are not what I would call, using a human expression, cosy. At the moment I prefer to cuddle on the bed and watch my favourite human typing on the laptop. And as there is no grass to watch grow. I make a thorough inspection of the inside of my eye lids. No, I’m not sleeping (OK, occasionally I do). Very extended ‘cleaning sessions’. Which is not only cleaning, it’s a massage, too. If you were ever licked by a cat. You may have realized that a cat’s tongue is kind of rough. Helps cleaning, taking off loose hair and massages the skin too. Humans go to a beauty shop (mostly females) to get this treatment. I’m doing this on my own. And my beauty shop is wherever I want it to be. And I don’t have to pay for the treatment.

I just can’t help it, a bit politics. Not really politics but something about politicians. I was talking several times during the last weeks about the ‘scandal’ with the overpaid reunions.

This made me think about something slightly different. Here in Belgium as wall as in France. It is possible that one single politician is mayor of a big city and at the same time has an important position in the government.

For example the last ‘Premier ministre’ was at the same time, and this he still is, mayor of Mons. No idea about the actual one but I’m quite sure he is in a similar function somewhere.

How is this possible? Not; how is this legal, it apparently is. But how could you ‘take care’ of a city and at the same time ‘take care’ of a whole country? In my small brain I’m convinced you can do just one of them and not both.

Just imagine in your role as prime minister you may have to take a decision against the city where you are mayor of. Or you may not. Your decision could be good for the country and bad for the city. Or good for the city and bad for the country. Which one do you take? In Belgium they like to let the judges take the decision. So you drag yourself to the court? I know that in my human’s country of origin, this is prohibited by the law. It’s either or. You can’t be both. In France it’s allowed, in Belgium it’s allowed. Maybe French and Belgian politicians are superior beings, I don’t know.

Milady is till not taking new photos. Stock again, but don’t worry the stock is large enough.

And still many Americans just don’t get it…

By Deborah H. Sussman I grew up believing that American democracy was the corrective to the fascist virus that overtook Germany in the 1930s, and that I lived in a country which, while deeply flawed, was fundamentally committed to justice and becoming more so. I think my refugee father believed the same thing. My father […]

Source: The “Civilized” World Looked On and Did Nothing

How to Be a Good Communist – BLARB

Source: How to Be a Good Communist

Today I’m reviewing “Angels&Demons” by Dan Brown translated from American into German (‘Illuminati’) by Axel Merz. Another part of my ‘50 Classics Challenge’

An ancient secret brotherhood. A devastating new weapon of destruction. When world-renowned Harvard symbologist Robert Langdon is summoned to a Swiss research facility to analyze a mysterious symbol—seared into the chest of a murdered physicist—he discovers evidence of the unimaginable: the resurgence of an ancient secret brotherhood known as the Illuminati…the most powerful underground organization ever to walk the earth. The Illuminati has now surfaced to carry out the final phase of its legendary vendetta against its most hated enemy—the Catholic Church. Langdon’s worst fears are confirmed on the eve of the Vatican’s holy

An ancient secret brotherhood. A devastating new weapon of destruction. When world-renowned Harvard symbologist Robert Langdon is summoned to a Swiss research facility to analyze a mysterious symbol—seared into the chest of a murdered physicist—he discovers evidence of the unimaginable: the resurgence of an ancient secret brotherhood known as the Illuminati…the most powerful underground organization ever to walk the earth. The Illuminati has now surfaced to carry out the final phase of its legendary vendetta against its most hated enemy—the Catholic Church. Langdon’s worst fears are confirmed on the eve of the Vatican’s holy conclave, when a messenger of the Illuminati announces they have hidden an unstoppable time bomb at the very heart of Vatican City. With the countdown under way, Langdon jets to Rome to join forces with Vittoria Vetra, a beautiful and mysterious Italian scientist, to assist the Vatican in a desperate bid for survival. Embarking on a frantic hunt through sealed crypts, dangerous catacombs, deserted cathedrals, and even the most secretive vault on earth, Langdon and Vetra follow a 400-year-old trail of ancient symbols that snakes across Rome toward the long-forgotten Illuminati lair…a clandestine location that contains the only hope for Vatican salvation.

It is quite complicated to judge this book without comparing it to the one I’ve read before. I do not think it is fair to judge Dan Brown in comparison to Jane Austen. Even if you forget that these are two completely different works. Austen work of art, Brown work of ??? commerce. With Dan Brown’s book I couldn’t help but constantly thinking the book is written to be sold. And that is the only reason it was written. Like one of the courses ‘How to write the next bestseller’ Dan Brown sold a sh..load of this book. So who am I to judge

If you haven’t read it and you are interested by conspiracy thrillers, by the Vatican. A bit by medieval art (architecture in the widest sense this time) and you’re not looking for literary merit (for whatever that may mean). Why not? 15 out of 20 points

Good morning, Humans. Still not much going on in my little corner of the blue marble. Thus the constant problem. What, by Odin’s beard, shall I rant about today? And if you have no idea what to rant about. Use your pet themes. Politics, aka, ‘human follies’ and cat food, aka ‘human folly’

Let’s start with politics. Although I’ve already said that I won’t complain about the outcome of the presidential election in the US of  America. Sounds funny, ‘United states’. Don’t know but a Union is in my dictionary something else. Just one little thing about that. I’ve read (had to read) someone quoting one of those who voted for the ‘president elect. “He’s a successful business man he must know what’s good for the economy.” Pardon? If he’s apparently successful. 1. Please define what successful means and 2. Let’s imagine he is successful what gave you the idea that he will do something for YOU?

Enough with that. I’m living in Belgium and there are enough politicians to complain about. We do not need to look to the “US of A” for that.

So, Belgium is legally split in three regions. Flemish (Vlaams speaking, kind of Dutch, sorry to all those in the Netherlands), Wallonia (French speaking) and Bruxelles. Officially there’s a fourth part, the German minority. But you NEVER hear them complain. At the moment there’s a bit of a struggle between the Flemish part and Bruxelles. Next to Bruxelles is the airport and the starting and landing aeroplanes make a lot of noise. This is apparently disturbing the inhabitants of Bruxelles. (Who are using these airplanes to go on holiday. But then the planes don’t disturb THEM) There is a noise/pollution reducing law in the Bruxelles region. And the government of Bruxelles decided that they will enforce this law from Wednesday on. Heavy fines to the air companies who are not respecting this law. Companies are menacing to leave the airport of Bruxelles (Zaventem or Bruxelles national) if they will be fined. Bruxelles said: “OK, we will freeze the law if the Flemish government accepts that the landing corridors will be altered.” Flemish government replied: “No way. This is an insult. If Bruxelles continues, we will go to court.” Conflict of interest, they call it. That’s Belgium. We want the advantages but would someone else please take the disadvantages.

Cat food. I prefer my dried food, one single flavour. Chicken. OK, it’s called ‘volaille’. Which doesn’t necessarily mean chicken, could be pigeon or something else with wings. But in general it’s chicken. Rashid prefers his food wet thus 4 different tastes. Chicken (not at the moment), Beef (not really at the moment) Salmon (half a package may work, depending on his mood) and Rabbit (several packages a day). OK, Rashid doesn’t hunt but even if. Beef? Salmon? Who had this idea of feeding a cat with something the cat NEVER EVER hunts? I’m weighing slightly more than 4 kilos. An idea how much weighs a cow? And no, we are not scavengers. Felines hunt, kill and then eat what they’ve killed. So, where does this idea come from? Feeding cats with something they never hunt. Could it eventually be that we are fed with leftovers from human consumption? You humans eat beef and a lot of. And what you don’t think is suitable for human consumption you feed to us. Do you think we like that? You are using a lot of mice in your laboratories. If they are healthy we would hunt and eat them. Not the crap that you’ve infected with diseases, the healthy ones. So why, please, is cat food not mouse flavoured? Could even be rat. If anyone who’s reading this knows why. Please, please let me know. I just want to know

Photo again from the stock. Milady seems to be on strike. If it concerns me or even Rashid. Other cats, no problem. But not us. 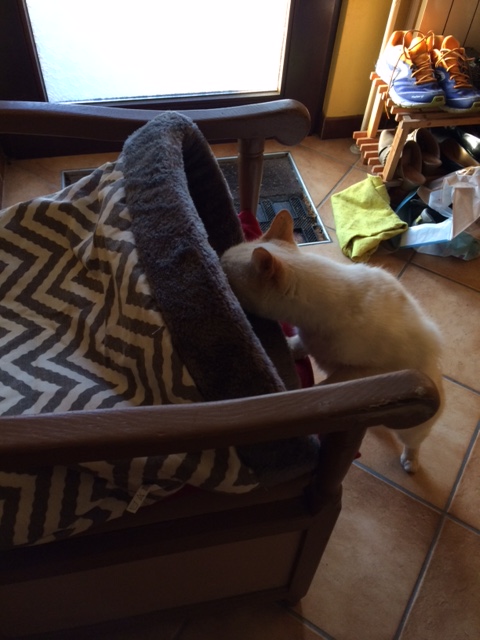 By Colin Marshall Even though I live there, I still only with difficulty perceive Northeast Asia through any lens not borrowed from Chris Marker. This owes mostly to the influence of dozens of viewings of Sans Soleil, his 1983 fact-and-fiction cinematic travelogue through places like Iceland, Cape Verde, San Francisco, and especially Japan, a feature-length […]