#BookReview What Haunts Me by Margaret Millmore #RBRT Author: Margaret Millmore Category: Paranormal My Rating: 3 out of 5 stars Review: George recovers from the flu but finds that he is now able to see the ghosts that haunt people and make them ill. He discovers that he has a skill for killing these creatures […]

Today, we will start my weekly outing a tad different. “Thou shall honour thy readers” especially teenagers with beautiful green eyes.

So, Kitteny, my pen pal from the UK, made last week the remark. That I’m always either sleeping or waking up in my published photo.

This is not completely wrong and quite easy to explain. I don’t like to pose for photos. Never was and never will. My preferred photographer (the female human) wants to take the perfect photo, all the time. Or, at least, as close as possible to perfection.  This means I should pose for a photo. I’m not doing this. In general, I move at the last possible moment. Thus ruining the photo for her. To avoid this, the only possibility is taking me on photo when I’m either sleeping or when I have just woken up. This explains why the majority of the “good” photos of me are like they are. My preferred photo, the one where I’m supervising my kingdom, was taken by my favourite human. Without the slightest intention to have a perfect photo. For him, it is not the quality of the photo that is important. It’s the motif.

You can accept this as an explanation, Kitteny? By the way, if you want to see a cat that’s sleeping all the time. The pure breed would be something to look at. He’s sleeping a lot more than I do. OK, this might have something to do with our advanced age. We are no longer teenagers.

Back to actuality. What’s going on in my kingdom? Nothing much, it was raining for the last 48 hours and it still rains. It’s just not funny; I don’t get how my human can go running in weather like this. Besides, I don’t get why he goes running at all. But this is his problem and what is good for him is good for me. So, go running. Have fun. I stay in bed and stock some energy for when it’s better outside.

What else? Although someone told me I should ignore politics. Sometimes I just can’t.

There are a lot of strikes in Belgium, in general, and certainly at the moment. Railway, air traffic controllers, everywhere. The funny thing occurred with the prison guards. They’re on strike for a month, now. The trade unions are negotiating with the justice minister (Lord chancellor in the UK). They arrived at a conclusion, which, as it should be, was necessary to be accepted by the union members. The union members rejected the conclusion, nearly in unison. And the justice minister declared IN PUBLIC. The members don’t have the right to reject the conclusion. You need some serious balls to make a statement like this.

Enough with politics although it’s funny to hear these guys. In general, it just isn’t.

In order to show Kitteny that there are photos where I’m not sleeping. An oldie but a goodie.

Excerpt from an informative article on The Write One Site:

Obtaining the copyright for your newly complete manuscript is an essential part of protecting your work. Once you have gotten the rights to your creation, you are free to start setting up your book copyright page! Now, I’m sure as a newbie writer you are wondering what exactly needs to go on your copyright page. Every book you’ve ever read probably has some variation from the next. However, there are a few key things that absolutely must be included on your copyright page.

To read the full article, click on the link or image below:

What Should Be Included On Your Book Copyright Page?

In the Shadow of the Storm

Kit is abducted in a mysterious and intriguing opening scene that leaves much room for speculation. It soon turns out, though, that she is the bastard child of Thomas de Monmouth, and she is being forced to replace her legitimate but runaway half-sister Katherine de Monmouth in an arranged marriage to Adam de Guirande. This union is suggested by Baron Mortimer and encouraged by him with a great dowry. Kit, posing as Katherine, and Adam find themselves sexually compatible in a series of explicit romantic scenes but they still have to overcome their other differences. The real Katherine had an affair with Baron Mortimer and keeping the switch hidden becomes more difficult as the novel progresses, while the political background for this early 14th century story is the uprising of Roger Mortimer against the king.

Here on Wednesday Wing we try to pass on useful information for readers and writers.

Contrary to popular opinion, self-publishing isn’t just a case of uploading your manuscript and spending the royalties. There are some technical and legal issues that you need to be aware of – issues that can have a real impact on royalties, marketing and sales.

An ISBN is the International Standard Book Number. It’s a ten (pre-2007) or thirteen (post-2007) digit number that identifies a particular book. The ISBN is used by publishers, booksellers, libraries, internet retailers and others in the supply chain for ordering, listing, sales records and stock control. You do not need an ISBN to publish an eBook through Amazon’s KDP. When you upload your book, it will be assigned a unique ASIN (Amazon Standard Identification Number). If you…

Histfic and reviewed by Terry. Must reblog

Today’s Team Review is from Terry, she blogs at http://terrytylerbookreviews.blogspot.co.uk/

Terry has been reading Back Home by Tom Williams 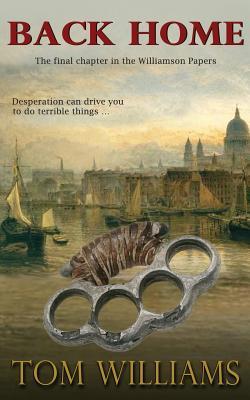 BACK HOME by Tom Williams

I loved this book. Although the third part of a trilogy, it is a complete stand-alone (I haven’t read the other parts), with a two page preface that gives exactly the right information about what has happened before; this is so well written that I couldn’t wait to get cracking on the main story.

Back Home is an excellent piece of intricately researched historical fiction, set in the mid-19th century, when affluent, middle class John Williamson returns home from thirty years in Borneo and India to find England a place that has gone through much change. Circumstances take him to London, where he becomes involved with the murky, criminal side…

Hello humans. Monday again. Time flies. Nothing much going on at cat castle. Weather is mostly Belgian. Wind and rain. And a lot of it. I could cope with either of them. The combination is not something that’s good for cats.

Do I have to explain it again? Don’t think so but we will do it nevertheless.I could cope with either of them. The combination is not something that’s good for cats.

It’s not very complicated. We cats have two layers of fur. An exterior one with long hair. That’s the part we are distributing everywhere we settle down for a while. And a short, more dense. That’s under our exterior layer of fur. Something we loose less. If you find our fur somewhere on your furniture, fresh pressed clothing, wherever. This is our external fur. The interior one keeps us warm and dry. The danger for us is if we get soaking wet, the interior layer is getting wet too. As this is the protective layer, it is necessary to get it dry again. Let’s imagine we don’t have a space that’s protected from wind and rain. This could become dangerous. If the interior layer gets wet and there is NO place without draught. DANGER. If we catch something like a flu, it could become mortal. Protect us from this, please. Not funny to watch, believe me.

Then something less serious.

Time. You humans put a lot on and/or in it.

You’re constantly under pressure, you even have names for every day. And you (or better: someone) have decided that some days are for work and others are for leisure. This thing that you call weekend. Could you eventually explain the difference between Sunday and Monday to me? I don’t get it. The sun goes up in the morning, and it sets in the evening. And in between there are some hours. Which you could fill with whatever you want or have to do. As an example, from Monday to Friday my human gets up at 5:00am, Saturday and Sunday at 6:00. No matter if it’s raining, snowing or the sun is shining.

You do this year in year out. Why don’t you adapt to the season? When there’s snow and it is still dark at 5:00am why don’t you stay sleeping? And just get up when the sun is up and shining?

And then there’s this thing called holidays.

I don’t get that. You have some time off from your usual schedule. Fine. You use this time for what? Adapting to the season? Not that I know. To get away from your daily life? Replace it with another stress? Do you honestly think this is a good plan? If you need time away from your daily life. Don’t you think it would be a better plan to change your daily life? So that you don’t have to get away from it? Maybe you should reconsider what’s important in your life? Is it important to be a good consumer? Buying things to just throw them away after several weeks. Do you need the new gadget? And every year a new one? Do you need to check this plastic extension of your hands every 5 minutes?

For what? Does it make you happy? On some of these gadgets you can look at cat videos? Nice, ever tried to just look at a live cat?

Which one of these two things makes you really happy? The living cat or the video of a cat?

Think about it for a while

See you next Monday

You know by now who’s taken the photo of me, don’t you?

I’m delighted to welcome back an old favorite of mine: Amy Metz. Here is my Mystery Monday Interview with her:

Today’s Team Review is from Alastair, he blogs at https://northpointsocial.wordpress.com/

Alastair has been reading Across Great Divides by Monique Roy

`Dramatic family saga, set against the backdrop of Nazi Germany and WWII’

Right from the start you get a real sense of time and place in this book, which opens just as Hitler and the Nazis have come to power in Germany during the 1930s. Monique builds up the pace steadily, introducing the reader to Oskar, a diamond cutter and dealer, his wife Helene, plus his twin daughters Eva and Inge, and their brother Max. From the first few chapters you can feel the foreboding, as the Nazis gradually tighten their grip on political power and then Hitler’s long term plans for the Jews of Europe, are set in horrible, tragic motion.

I have to say that the…