You want politics, here we go.

Something Belgian ? Completely against democracy ? But apparently LEGAL.

The story is quite old and ongoing. The surroundings of Bruxelles are in general part of the Dutch speaking authorities. Which doesn’t mean that the citizens are not mainly French speaking.

And it happened. Elections to decide a new mayor of Linkebeek. The French speaking candidate had the audacity to send his leaflets in French to French-speaking citizens of Linkebeek. You may say this is quite a friendly act. And you are right. But and this is a major but. Anything related to language diversity in Belgium is highly dangerous. So the law says the leaflets HAVE TO be in both languages. Result: the action of this candidate was kind of against the law. Friendly, but against the law. The regional government, extreme Dutch, does in no case accept the outcome of the election. Ah, forgot to tell you. Election, citizens in majority French-speaking; Winner ? The candidate who send his leaflets in French. And to put that right. He sent his leaflets in French ONLY to French-speaking citizens. The Dutch minority got them in two languages (French and Dutch). Re-election. He won again. Regional government does in no case accept THIS candidate. Re-election. I’ m sure you can guess the outcome. But the regional government APPOINTS the guy who came second in the election (Dutch speaking) as major.

This guy has no majority in the town council. Promises to step down if he won’t be supported by the French-speaking majority. No support—he steps down.

Regional government REFUSES to appoint him as mayor (although leaflets were in both languages). This morning the minister of the interior for the Dutch speaking region claimed. In NO WAY this guy will be appointed mayor during the actual election period (until the 31st December 2018).

So what will an outsider think about this comedy ?

First, there are 3 (three) official languages in Belgium. You never hear a complaint by the German speaking part, never ever. If there are complaints it’s French versus Dutch and vice versa.

Second: Does democracy exist in Belgium ? Kind of: IF you avoid anything language related.

Third: Does this cost a shitload of money? You bet. Does anyone involved give a rats ass ? Nope, if it has to be in two languages, it has to be. Even if it doesn’t make the slightest sense.

Four. Has this anything to do with democracy in the pure meaning of the word ? Stop dreaming. We’re talking about principles here. Not about democracy.

You prefer reading this ? And not something nice about cats ? If you wish so I’ll do so.

But cats are important so here’s a nice cat pic. Taken by the female human and yes, she has some talent. 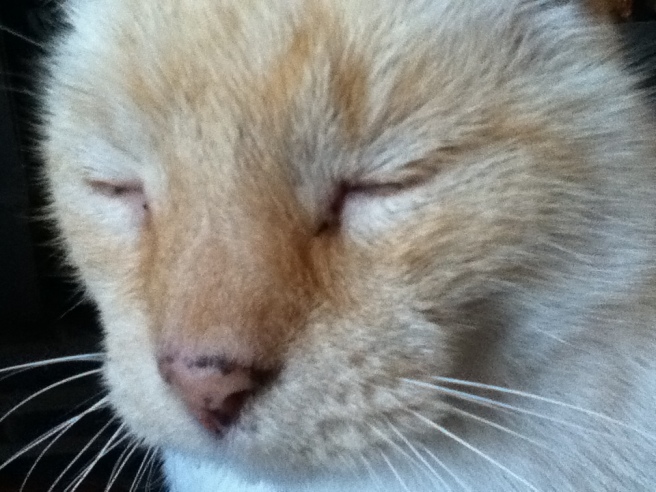 Zen and the Art of Tightrope Walking

Tales of the Wellspring 4 ~ life, spirit and the land

It’s been a considerable time since I wrote one of these posts; my interest in wellsprings has not waned but I have not felt led to write about them for a while. I’ve been a part of a couple of groups on Facebook which post photographs and articles on holy wells, springs and related phenomena, and it’s shown me how widespread and current a belief in the healing powers of wellsprings still is. In the UK and across the world, springs are revered and protected and visited by pilgrims seeking healing.

Such places usually have a powerful and numinous atmosphere, whether they are in towns or cities, or out in the wilds, or in corners of ancient sites of worship. Some are mere trickles that feed streams, sometimes drying up for months on end like the Swallowhead Spring that…

Source: #Books are Portals to Power…

This situation can really ruffle your writing feathers. Its only taken me 18 months to accept this. Newbie Writer Dream Euphoria. You are a fresh faced newbie writer with a head full of writ…

Source: Accepting You Are 100% Responsible For Making Your Writing Dreams Happen #SundayBlogShare #writers

Perfect words for a not-so-perfect world

I’ve been toying with this for a while. As I see Shannon Johnson‘s name spread around social media, it seems to be the perfect time to post it.

Who’s that guy who murdered all

of those kids at Sandy Hook? What were the names of the Boston Marathon bombers? Who shot all those people at the church in South Carolina? What was the name of the Aurora movie theater shooter?

Before you answer, let me ask a few more questions. Who was Victoria Soto? Who was Martin Richard? Who was Sean Collier? Who was Clementa Pinckney? Who was Jonathan Blunk?

This blog connects to two earlier entries in medievalfragments: Irene O’Daly’s recent blog on how scribes are depicted in medieval art (here); and Jenneka Janzen’s assessment of how we are to understand the “physical scriptorium” (here). Something struck me when I read both pieces, in particular when I looked at the images accompanying Irene’s blog. The scribes in her story, as well as those in images I had on file myself, are depicted as individual copyists instead of scribes working in groups. Even when multiple scribes are presented in each other’s vicinity, such as the four evangelists in the Aachen Gospels of c. 820 (Fig. 1), we are still looking at multiple individual scribes – after all, they have their backs turned to each other and are separated by rock formations. My point, you ask? Where are the scriptoria, I reply!

Link to story 3rd line before last. Well worth reading. Every word of it…

My RAWr Words? Right there is a transcript of how Rubio’s speech on rape and abortion impacted me and is still impacting me. My choice was taken from me when I was a child, and Marco Rubio supports…

A friend of mine recently told me that she had an affair with a married man. Gasp!!! Meh, get over your shock, people are human. There are handsome and vital men out there, and maybe their wives re…

Source: An Ode To The Married Man To My Right

While I had to cancel the (De)Caffeinated Confessions competition due to a family emergency (and turn it into a call for May submission on the theme “humor,”) you didn’t miss…

Source: In Case You Missed It: Extended Competition Deadline

Great review. Still working on the quality of mine…

“The Embroiderer” by Kathryn Gauci has been a marvellous find for me. It is just the kind of historical novel that I like to read. It is highly informative with a lot of political and cultural insights about a theatre of war I knew little about: The Ottoman Empire between 1822 and 1944 with a special focus on Greece and Asia Minor from 1912 onwards.
The story is spread out over several generations and illustrates multiple conflicts. An array of well-drawn characters make the wider picture personal and intimate.
In short, it was a real pleasure for me to read.

Blurb:
“Set against the mosques and minarets of Asia Minor and the ruins of ancient Athens, ‘The Embroiderer’ is a gripping saga of love and loss, hope and despair, and of the extraordinary courage of women in the face of adversity. 1822: During one of the bloodiest massacres of The…