I preparation for my ‘fifty classics reading challenge’.  For pure training purpose here’s my attempt to write a critique for one of the books I’ve recently finished. Did a quick one on Goodreads. This one should be a bit more detailed. 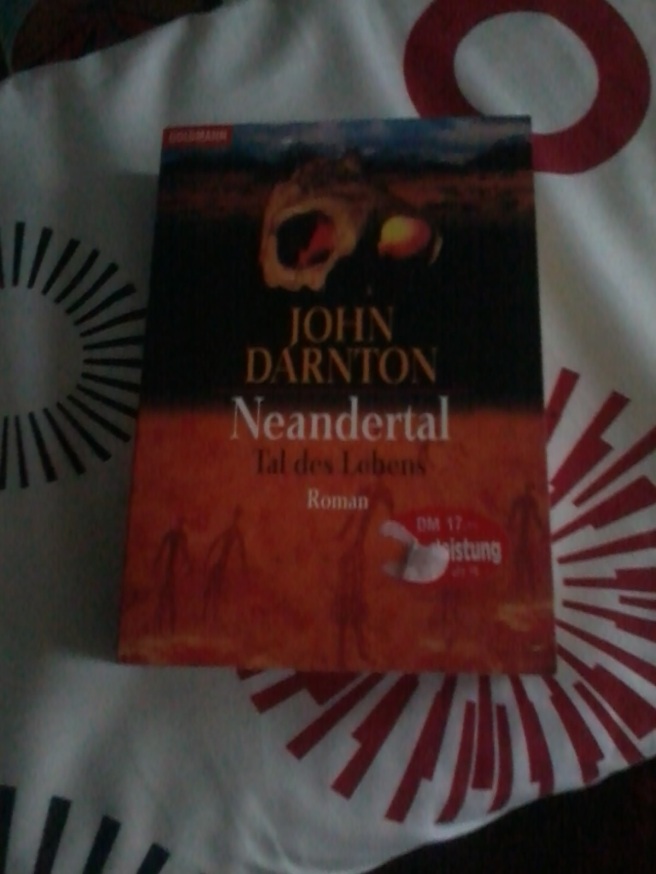 Read the German translation, no translator mentioned in the book (disgusting !)

My translation of the text on the back of the book.

A famous scientific vanishes under mysterious circumstances in the Pamir region. His last sign of living was a parcel he sent. Containing the skull of a Neanderthal, extinct for 40.000 years. Miraculously the skull was only twenty-five years old. A forgery ? Or the confirmation of an unbelievable speculation – somewhere a tribe of hominids has survived.

The plot of Neanderthal revolves around two rival scientists, Matt Mattison and Susan Arnot, who are sent by the United States government to search for missing Harvard anthropologist James Kellicut. Their only clue is the skull of a Neanderthal. Carbon dating shows that the skull, which should be 40,000 years old, is suspiciously only 25 years old.

The Russian and American governments are competing to study the surviving Neanderthals in Tajikistan in order to learn more about their “remote viewing” capabilities. The Neanderthals are split into two tribes, a peaceful valley tribe and a cannibalistic and violent mountain tribe. Soon, the protagonists are captured by Neanderthals and must try to escape from the cannibals. They hope to do so without jeopardizing the safety of the peaceful tribe. It eventually, however, becomes necessary to train the peaceful tribe for war. The novel explains that a completely peaceful society like that was doomed in any case, and would have been destroyed soon by the mountain tribe.

What I liked about the book:

–          it was an interesting story. A nice background story to start (enigma of Khodsant, no traces whatsoever on the web). The plot does not have any dull moments. Anything about the plot is, at least, imaginable. And it’s, for me, working. It could be.

–          The two different tribes of the Neanderthals are imaginable, too.

There is suddenly a member of the Russian expedition coming to the rescue. Out of nowhere ? With two tribes that could sense your presence ? Just not believable.

The last scene with the professor. I don’t get it. As a famous scientist you should be remotely intelligent. In this scene the professor is nothing but committing suicide. Thinking several seconds about his plan he must have realized that he would be killed. There’s no other possibility. If his plan would have worked he would have condemned an ancient student, an ancient lover to be sacrificed. It might be in line with his character changes, but I can’t believe it. I simply can’t.

On ‘Goodreads’ I gave the book three stars. This still means ‘I like it’. Yes, I like it. But there are these mentioned flaws. I would not downgrade a book for unnecessary sex scenes. But the flaws are just a bit too much to give a higher rating.

Would I recommend this book to a friend  ? Depends on the friend. If you just want something nice to read for a commute. OK, you might not regret it. I’m not regretting the time I spent with it. There won’t be a lasting impression, that’s all.

Got another bonus reason. They can feel how you’re feeling. And act accordingly. Mine at least

If I could only find words…

…born at the tail end of the of the 1940s, this ol’ Scots Jurassic is very much a child of the ’50s and ’60s... scholastic gadgetry such as pocket calculators, followed by desktop compoooters, and ultimately by the plague of  iPhones, iPads, iThis and iThat and iWhatevers were unknown learning tools… sliderules and logarithm charts, abundant with algebraic components, sines, cosines, tangents, vectors and quadrolililililililiograms kept active what little grey cells we possessed back then…

…fast forward to the modern day, and the curse/blessing of nano-technology and insta-communication offers up the WUNDERS-of-the-WURLD-WIDE-WEB… this wee Caledonian scribbler, rooted firmly in days of yore, consistently railed defiantly against each successive wave of new-fangled ‘stuff’ as the ‘50s and ‘60s yielded grudgingly to the ’70’s, ’80’s, and beyond… employing old-fashioned mental arithmetic and owning a staunch supply of academy-level vocabulary, the Google route for Master Gallacher was a

Saturday will be the next visit in the local library. And we even have a library bus from spring to autumn (once a month) Unfortrunately everything in the “wrong” language

Wednesday Wing is a series of posts where we look at books from the POV of the reader.

Local libraries are dying out.

In the last year I think I have visited Fleet library just three times. On each occasion I have headed for the upstairs non-fiction section. Before I began reviewing I was a regular visitor devouring all the shelves of their books. I’ve always liked to read, as a child we lived in the countryside and had a mobile library van come and visit once every two weeks. I was lucky enough to be able to introduce my kids to the magical experience of the library bus (as they called it) when we visited their Grandparents. There’s nothing like standing at the dis-used official bus stop watching the vehicle containing dreams and adventure driving down the road and stopping just for you.

Now it’s over to…

a creative and overall low Source: 10 Things To Expect The Day After A Creative High #writers #amwriting

The weekend before last my human published a photo of me on Twitter. Indicating that I was injured. Yup, I had let’s call it a little sportive injury. Had for several days a problem putting my left front paw down and supporting my weight with it. Just had a little landing incident while hunting. Nothing serious. My human figured it out quite fast. I was eating normally, my fur stayed shiny, brilliant if you want to say so. And most important I wasn’t hiding. So, there was no visit at the vet necessary.

Lucky me, no injection. I can accept that, from time to time, it is necessary to give me one. But once a year is really enough. Not that I’m afraid of being at the docs office. She’s quite a friendly person. Knowing how to treat animals. It’s interesting being there. Seeing all the different things, smelling who was there. But getting pricked is not something I’m looking forward to. Already I dislike the trip. I get caught, put in my transportation box. 15-minute ride in a car and some time waiting. Before the lady touches me. I’ve no problem when a lady touches me but I don’t like injections. Already being stuffed in my transportation box isn’t something I like. Riding in cars I already had my share. Sitting in my box in the waiting room with all the odours. Not something I have to have every week.

My pure breed co-cat doesn’t like it either. But for him, being a so-called purebred, it’s kind of different. First like me, he always has to hear: “Oh, il est beau” Every time for him, every time for me. Second, pure breeds are a bit delicate. If he has a little something from a fight with the local bully.  A female, must weigh something around eight kilos at least and just an ugly character, with every one !). Every scratch Rashid gets develops into an abscess. Result Rashid down for a week, getting his meds. Not eating much, just not himself. I do get my scratches from the bully. But I’m not that delicate. I have a scratch, get the usual ‘Not again’ from my human and that’s it. Rashid visit at the vet, three days down, not eating much. Sleeping even more than his usual amount. Every time. Purebreds, just a fragile bunch.

Humans if you happen to take care of a cat. Your cat may need a doctors visit every once in a while. There are the annual vaccinations. The vet should know what the cat needs. Please let your cat do his annual visits. Dying from coryza isn’t funny. For you it might be a cold or hay fever for the cat it could be deadly. Please vaccinate your cat. Once the cat got this sickness, the cat could die of it, even years after.

To finish on something positive. The weather looks good. Might hunt a bit this afternoon. 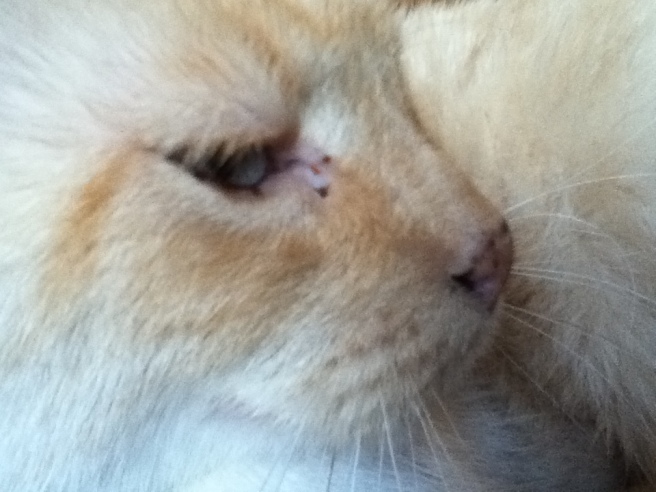 Zen and the Art of Tightrope Walking

The blind dancer is broken ~ a dream

Sometimes dreams give us clues about our inner world in ways that are both revealing and concealing. The last week or two I have been finding it very difficult to navigate my way through the world, and feel I have lost connection with things that have been important to me and my life force feels depleted and I feel direction-less. I’m working my way through a book on Jungian dream interpretation and after I started reading it, for the first time in a while a dream occurred that feels significant in understanding what is going on. I’m going to share it here; if you have any insights on this they would be welcome as I am hoping to clarify my own thoughts and often my friends here have been excellent at doing just that.

The first part of the dream is confused…

there’s nothing to add, well said

Idle blogs of an idle fellow

You’ve seen them. Absorbed in their phone like it’s a portal to the eternal orgasm. Pushing through crowds without looking up at London stations, Venice canals and Parisian boulevards, playing Candy Crush, AKA the portable lobotomy. As Scott Adams once said, ‘You can never underestimate the stupidity of the general public’, something the creators of Candy Crush know very well.

It’s hard to know what’s more infantile, this or the farmyard game, where fully grown, at least in size, adults, endeavour to collect virtual farm animals (read this out aloud people). It’s unclear for how long children might tolerate this inanity, but some adults are so addicted that in 10 years time you’ll be banned from playing it in pubs. They play it before work, on the way to work, and if you’re an MP at work; until the duller colours of real life becomes an irritant, something to glance at…